Some of the key works from APOGEE in the field of Stellar Astrophysics are summarized below. To recognize the significant contributions from Early Career Researchers, when referencing papers a * indicates a postdoctoral lead author, ** indicates a graduate student lead author, and *** indicates an undergraduate lead author.

APOGEE and the Astrophysics of Stars and Stellar Systems

APOGEE’s combination of a relatively high resolution spectroscopic survey, a sample of nearly ¾ million stars, multi-epoch observations, and push into a part of the spectrum that had previously been relatively unexplored (the near-infrared H-band) has opened up numerous new astrophysical explorations of stars and stellar systems, including substellar mass companions (brown dwarfs and planets). To make this foray into H-band spectroscopy required substantial efforts in the area of laboratory astrophysics to identify previously unidentified spectral lines (Hasselquist et al. 2016, Cunha et al. 2017) and to improve understanding of the atomic physics of infrared spectral lines (Shetrone et al. 2015, Smith et al. 2021), as well as improvements in the calculation of stellar atmosphere models (Zamora et al. 2015, Osorio et al. 2020).

For much of the past ¾ of a century the primary and almost only reliable age tracers for exploring Galaxy evolution have been star clusters, while our understanding of stellar evolution has been based on insights gained from analyzing the stars in open and globular clusters, assumed to be simple stellar populations of homogeneous chemistry and age. Partly aided by APOGEE observations, it is now clear that these assumptions do not quite hold (Meszaros et al. 2020, Poovelil** et al. 2020). Meanwhile newly developed tools for age-dating individual field stars has vastly increased the pool of viable tracers to benchmark major episodes in Milky Way evolution. APOGEE has played a critical part in developing these revolutions in our ability to explore both stellar and Galaxy evolution (see APOGEE's contributions to Milky Way science for more). 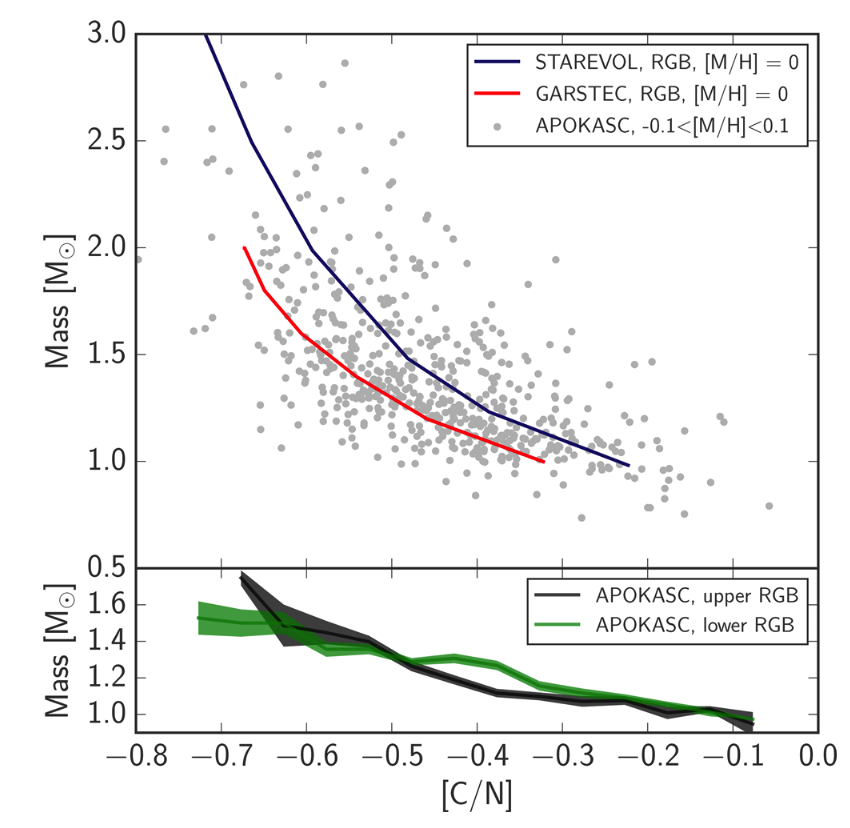 The combination of APOGEE spectroscopy with asteroseismic measurements allowed for the discovery of a correlation of the surface [C/N] abundances with the mass (age) of the star. Figure Credit: Martig* et al. 2016

Combining APOGEE spectroscopy with observations from precision photometry space missions like ESA’s CoRoT and NASA’s Kepler and TESS missions has opened entirely new ways to constrain our understanding of stellar physics and stellar evolution. The photometric data reveal subtle variability that comes from the fundamental oscillation modes of individual stars at frequencies related to the size and internal structure of the star. Combining these asteroseismic data with spectroscopically derived temperatures and chemical abundances like those provided by APOGEE allows an independent estimate of the masses, radii, evolutionary state, and therefore ages of isolated stars. As the theory and calibration of this methodology has developed, APOGEE data have played a role in identifying problems with not only our understanding of stellar models (Tayer** et al. 2017), but with basic asteroseismic analysis itself (Epstein** et al. 2014), including the need for corrections and careful calibration (Pinsonneault et al. 2018).

With a deliberate focus on observing numerous fields probed by CoRoT (Anders** et al. 2017 ), Kepler (Pinsonneault et al. 2014; Pinsonneault et al. 2018), and TESS (Mackereth* et al. 2021), APOGEE provides complementary spectroscopic data for several tens of thousands of red giant stars across a wide range of ages in many Galactic directions. The additional tool of gyrochronology for dwarf stars (see below) adds an independent pool of more nearby stars to the stellar population dating toolbox. Meanwhile, with the asteroseismic ages in hand, it was noticed that because of the particulars of chemical mixing in stellar interiors, the spectroscopic ratio of carbon-to-nitrogen abundances correlates with the stellar mass, and therefore age, of red giant stars (Martig* et al. 2016). Using both classical and machine learning methods (Ness* et al. 2016, Mackereth** et al. 2018, Hasselquist* et al. 2019, Leung** and Bovy 2019), this relationships can, in turn, be used to estimate the ages for hundreds of thousands of more stars in the larger APOGEE sample, vastly improving our ability to temporally benchmark the chemodynamical history of the Milky Way galaxy and its populations. 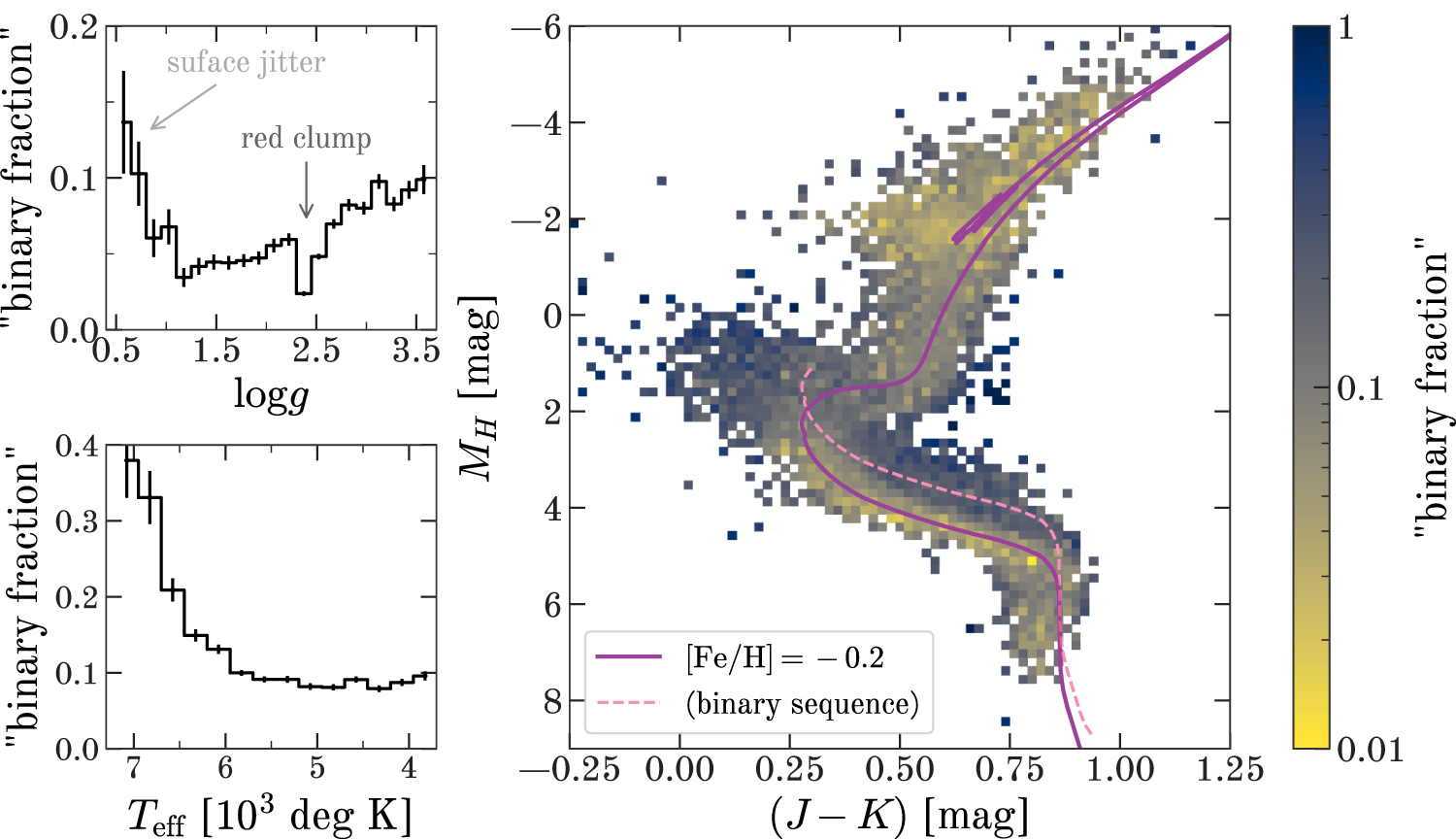 The binary fraction across the HR diagram as determined from Keplerian modeling of multi-epoch radial velocity data obtained with the APOGEE instruments. Figure from Price-Whelan* et al. 2020

With high resolution in the near infrared and multiple visits for each target, APOGEE is ideally suited to detect multiple star systems (binary, triple, and even higher order stellar systems) with periods up to several years through radial velocity (RV) shifts in the visit spectra, and to do so for a large fraction of the volume of the Galaxy. While most APOGEE stars were visited at least several times --- enough to detect velocity variability (Badenes et al. 2018, Mazzola** et al. 2020) --- hundreds of thousands of APOGEE stars were visited frequently enough to enable more refined Keplerian orbital solutions (Troup** et al. 2016, Price-Whelan* et al. 2018, Price-Whelan* et al. 2020).

An artistic impression based on a computer simulation of the Draco C1 symbiotic binary star system showing material flowing off the red giant star onto the white dwarf. These systems are the progenitors of some types of supernovae.
Image credit: John Blondin, North Carolina State University; See Lewis et al. 2020

This unique combination of resolving power for multiple systems and breadth of scope has allowed a mapping, for the first time, of the complex relationships between stellar multiplicity (fraction of binaries, period distribution) and stellar parameters (effective gravity, effective temperature, and chemical composition) using large samples of that are representative of the stellar content of the Milky Way (Mazzola** et al. 2020, Price-Whelan* et al. 2020). Furthermore, we have been able to do this precisely in the regime that is most important for understanding interacting binaries, which are the progenitors of transients like novae, cataclysmic variables, all Type Ia supernovae, many core collapse supernovae, and most stellar sources of gravitational waves (Lewis** et al. 2020, Anguiano* et al. 2020,Washington*** et al. 2021).

Other APOGEE Contributions to Stellar Astrophysics 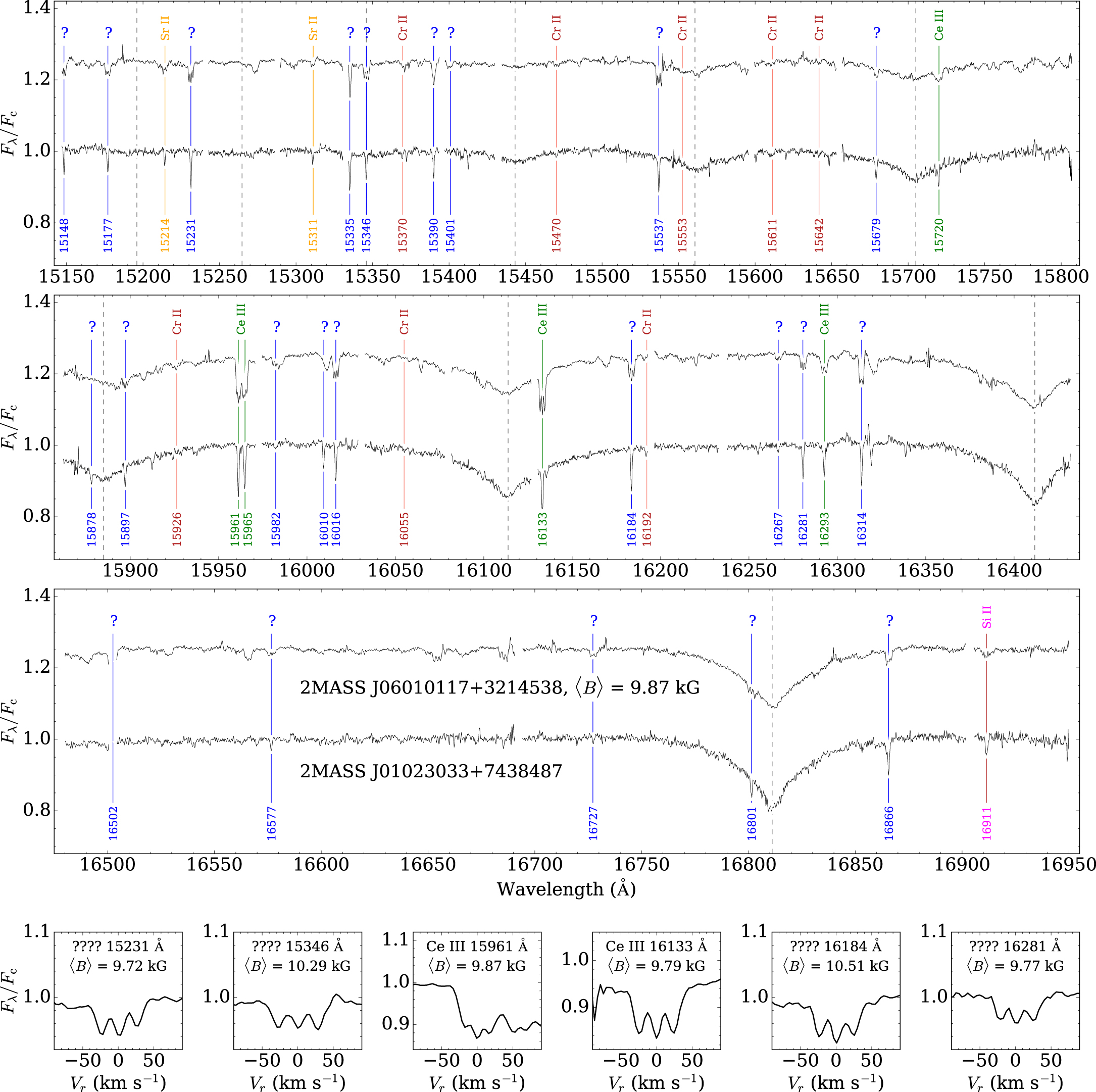 An example spectrum of a star with extremely strong magnetic fields that amplify the expression of some rare chemical species. APOGEE's large database of blue stars (used for telluric corrections) tripled the number of such stars known in the Galaxy.
Figure Credit: Chojnowski* et al. 2019 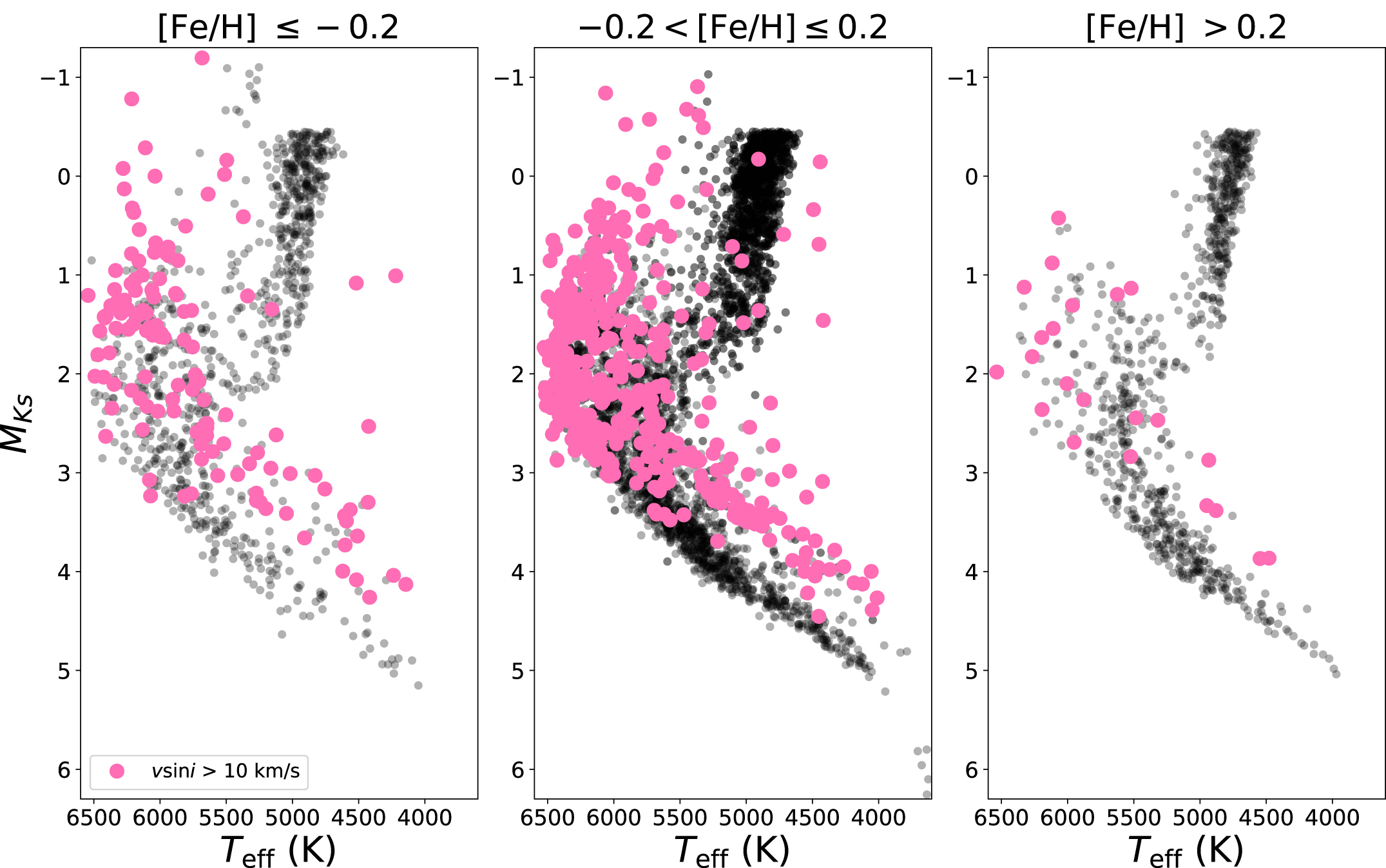 Rapidly rotating stars identified using APOGEE spectroscopy in an absolute color-magnitude diagram. Many of these stars appear to be unresolved binaries. Figure from Simonian et al. 2020.

It is well known that low-mass stars rotate at a rate that changes over the course of a star's life, which means that rotation can be used to estimate stellar ages (“gyrochronology”). However, APOGEE data have revealed that the rotation of old low mass main sequence stars is faster than expected (Ceillier et al. 2015; van Saders** et al. 2016) suggesting a change in the magnetic field structure around the solar age. However, for more evolved giant stars, it seems that rotation predictions are faster than observations (Tayar** et al. 2015) suggesting a need to modify the angular momentum loss laws (Tayar* et. al. 2018). Meanwhile, APOGEE's careful characterization of the rotational evolution of single stars has allowed the identification of stars that are tidally spun up by a binary companion (Simonian et al. 2020, C. Daher et al. submitted). This includes particularly interesting systems like the lowest mass black hole known to date (Thompson et al. 2019).