More information on SDSS-V and its mappers, including how to join SDSS-V, is available on the sdss5.org website. 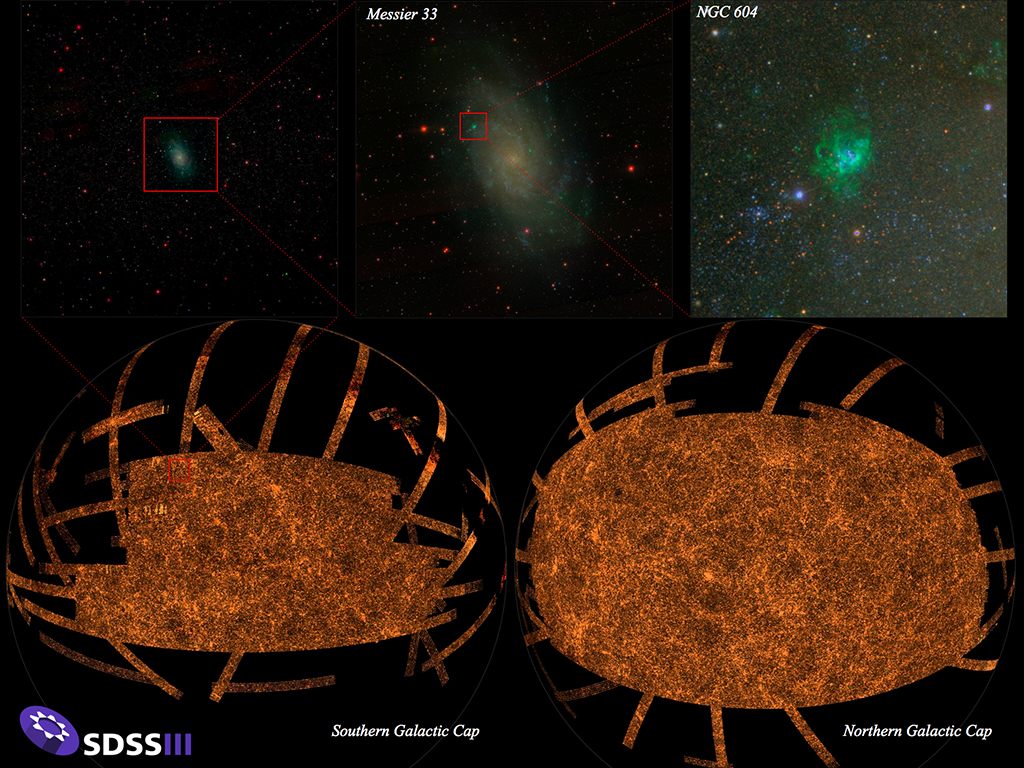 The SDSS "Orange Spider". This illustrates the wealth of information on scales both small and large available in the SDSS I/II and III imaging. The picture in the top left shows the SDSS view of a small part of the sky, centered on the galaxy Messier 33 (M33). The middle and right top pictures are further zoom-ins on M33. The figure at the bottom is a map of the whole sky derived from the SDSS image. Visible in the map are the clusters and walls of galaxies that are the largest structures in the entire universe. Figure credit: M. Blanton and SDSS

After nearly a decade of design and construction, the Sloan Digital Sky Survey saw first light on its giant mosaic camera in 1998 and entered routine operations in 2000. While the collaboration and scope of the SDSS have changed over the years, many of its key principles have stayed fixed: the use of highly efficient instruments and software to enable surveys of unprecedented scientific reach, a commitment to creating high quality public datasets, and investigations that draw on the full range of expertise in a large international collaboration. The generous support of the Alfred P. Sloan Foundation has been crucial in all phases of the SDSS, alongside support from the participating institutions and national funding agencies in the U.S. and other countries.

The latest generation of the SDSS (SDSS-IV, 2014-2020) is extending precision cosmological measurements to a critical early phase of cosmic history (eBOSS), expanding its revolutionary infrared spectroscopic survey of the Galaxy in the northern and southern hemispheres (APOGEE-2), and for the first time using the Sloan spectrographs to make spatially resolved maps of individual galaxies (MaNGA). Two smaller surveys will be executed as subprograms of eBOSS: the Time Domain Spectroscopic Survey (TDSS) will be the first large-scale, systematic spectroscopic survey of variable sources; while the SPectroscopic IDentification of eROSITA Sources (SPIDERS) will provide an unique census of supermassive black-hole and large scale structure growth, targeting X-ray sources from ROSAT, XMM and eROSITA. Finally, the MaNGA stellar library (MaStar) will provide an optical stellar library covering a wide range of stellar parameters. 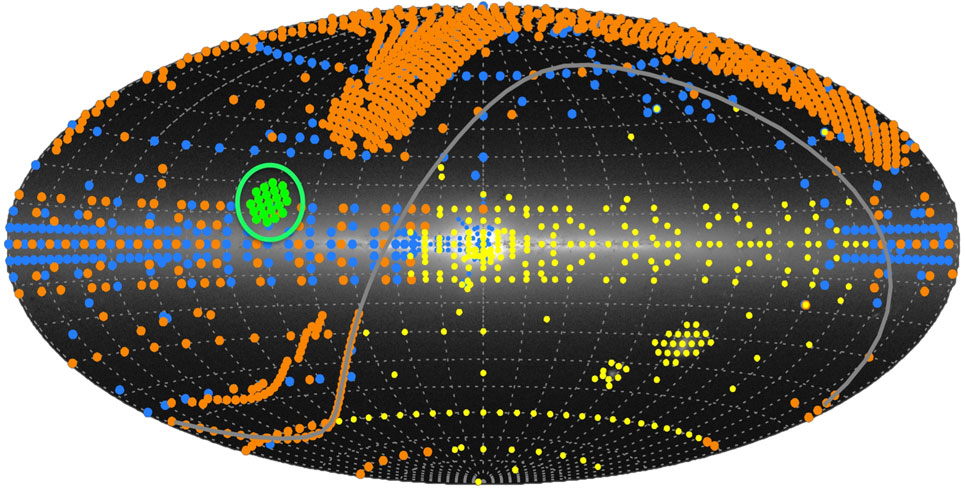 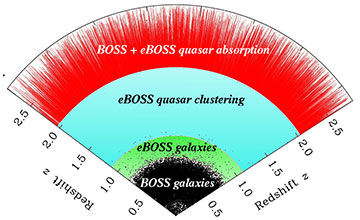 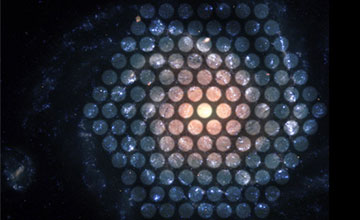 The galaxy survey for people who love galaxies! MaNGA will explore the detailed internal structure of nearly 10,000 nearby galaxies using spatially resolved spectroscopy. Subprogram MaStar will provide an optical stellar library covering thousands of stars with a wide range of parameters.
Explore MaNGA

SDSS-III (2008-2014) undertook a major upgrade of the venerable SDSS spectrographs and added two powerful new instruments to execute an interweaved set of four surveys, mapping the clustering of galaxies and intergalactic gas in the distant universe (BOSS), the dynamics and chemical evolution of the Milky Way (SEGUE-2 and APOGEE), and the population of extra-solar giant planets (MARVELS). You can still visit the old SDSS3 Website, but it is no longer updated.

The Baryon Oscillation Spectroscopic Survey (BOSS) focused on mapping the Universe on the largest scales, creating the largest volume three-dimensional map of galaxies to date and measuring the scale of the Universe to one percent.
Explore BOSS

The Sloan Extension for Galactic Understanding and Exploration (SEGUE) focuses on the structure and evolution of our own Milky Way galaxy. The SEGUE-2 survey builds off of the work of SEGUE-1.
Explore SEGUE-2

In its first five years of operations, the SDSS carried out deep multi-color imaging over 8000 square degrees and measured spectra of more than 700,000 celestial objects. With an ever-growing collaboration, SDSS-II (2005-2008) completed the original survey goals of imaging half the northern sky and mapping the 3-dimensional clustering of one million galaxies and 100,000 quasars. SDSS-II carried out two additional surveys: the Supernova Survey, which discovered and monitored hundreds of supernovae to measure the expansion history of the universe, and the Sloan Extension for Galactic Understanding and Exploration (SEGUE), which extended SDSS imaging towards the plane of the Galaxy and mapped the motions and composition of more than a quarter million Milky Way stars. The classic SDSS Website is still available, but it is no longer updated.

The original SDSS observing plan, which ran from 2000 to 2008, is now known as the SDSS Legacy Survey. It resulted in a uniform, well-calibrated map of the Universe that will be used for decades to scientific studies ranging from asteroids to the large-scale structure of the Universe.
Explore Legacy

The SDSS Supernova Survey, which ran from 2005 to 2008, performed repeat imaging of one stripe of sky along the celestial equator. The project discovered more than 500 type Ia supernovae, which have led to a deeper understanding of the history of the Universe.
Explore the Supernova Survey

The primary goal of SEGUE-1 was the kinematic and stellar population study of the high-latitude thick disk and halo of the Milky Way.
Explore SEGUE