Explore below to learn more about the SDSS telescopes, the SDSS spectrographs, and the SDSS imager.

The SDSS uses a dedicated 2.5-m f/5 modified Ritchey-Chrétien altitude-azimuth mount telescope located at Apache Point Observatory, in south east New Mexico in the south west of the United States (Latitude 32° 46' 49.30" N, Longitude 105° 49' 13.50" W, Elevation 2788m). The telescope, with two corrector lenses, features in a 3° distortion-free field of view. The telescope is described in detail in a paper by Gunn et al. (2006).

The fourth phase of the SDSS included its first observations obtained from the Southern Hemisphere. The southern observations are taken with the Irénée du Pont Telescope at Las Campanas Observatory in the southern part of the Atacama region of Northern Chile (Latitude 29° 0' 52.56" S, Longitude 70° 41' 33.36" W, Elevation 2380m). The du Pont telescope is a Ritchey-Chrétien 2.5-m f/7.5 equatorial mount telescope with a Gascoigne corrector lens and provides a 2.5 degree field-of-view. The telescope is described in detail in a paper by Bowen & Vaughan (1973). 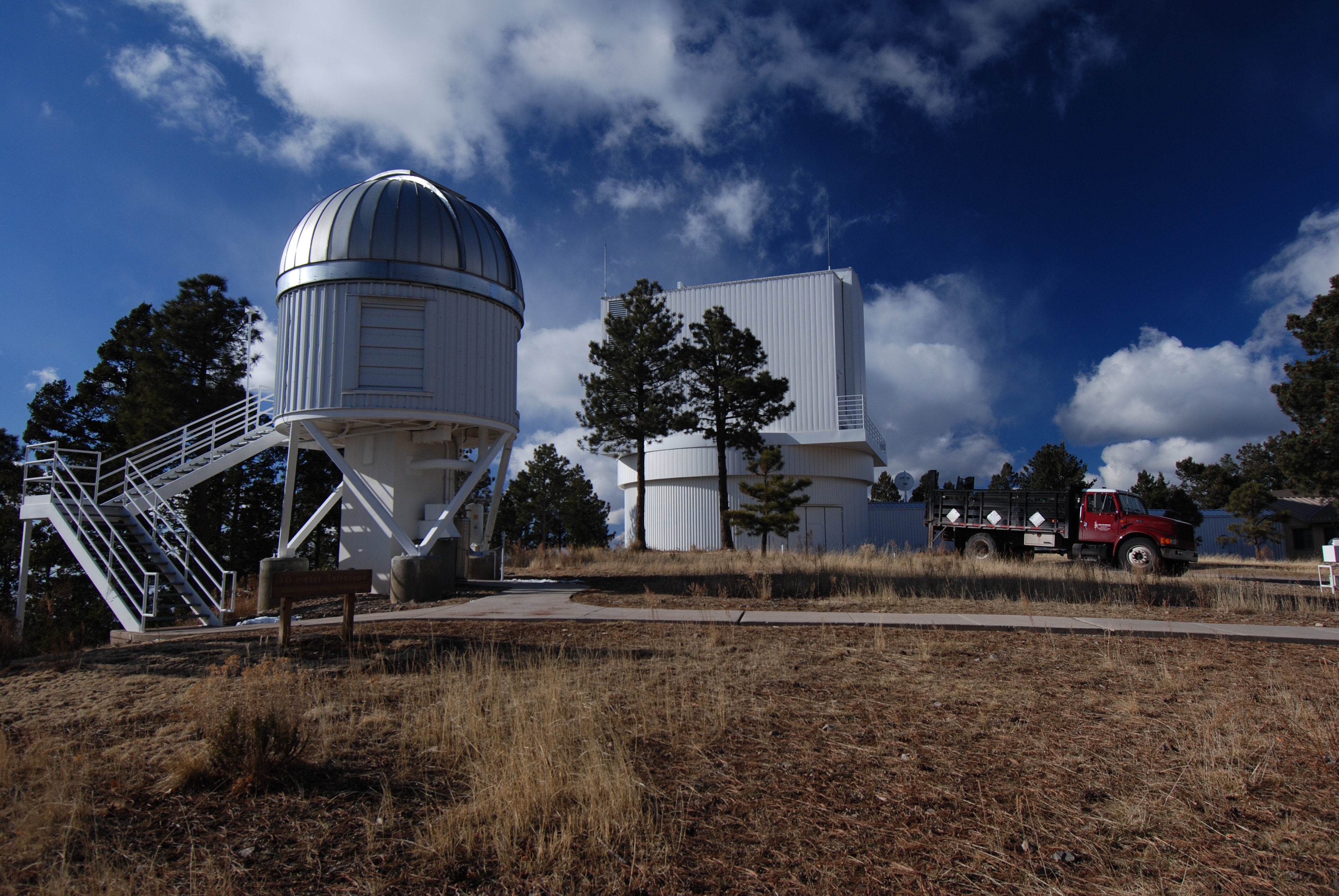 The NMSU 1 m dome at Apache Point Observatory in south east New Mexico in the south west of the United States. The larger enclosure in the background is the ARC 3.5 m telescope (image taken from Holtzman et al. 2010).

A number of important stars that are too bright to observe with the larger telescopes are instead observed with the NMSU 1-meter telescope at APO (Latitude 32° 46' 49.30" N, Longitude 105° 49' 13.50" W, Elevation 2788m). A fiber lead connects the APOGEE-North spectrograph to this facility, which contains a Ritchey-Chretien reflector set on an altitude-azimuth mount. The details of this telescope can be found in Holtzman et al. (2010).

The eBOSS spectroscopic survey continues to use the spectrographs built for BOSS. These two identical spectrographs are rebuilt from the original SDSS spectrographs, which were used for the SDSS Legacy and SEGUE surveys. Each spectrograph has two cameras, one red and one blue, with a dichroic splitting the light at roughly 6000 Å and a full wavelength range from 3600 to 10,400 Å.  Additional information can be found on the BOSS spectrograph page.

At Apache Point Observatory, the APOGEE-2 survey continues to employ the high-resolution, near-infrared spectrograph used for the APOGEE-1 survey. A close copy of the instrument was constructed for Las Campanas Observatory. The APOGEE instruments are custom-built, multi-object spectrographs that record the 1.51-1.70 micron spectrum of 300 targets simultaneously, with a spectral resolution of ~22,500. Additional information can be found on the APOGEE spectrographs page.

MaNGA is a galaxy survey that is obtaining detailed integral field unit (IFU) resolved spectroscopy measurements of 10,000 nearby galaxies. MaNGA uses the eBOSS / BOSS spectrograph, but instead of placing a single fiber on each galaxy, it uses specially-designed hexagonal ferrules to close-pack the circular fibers into hexagonal bundles. Each MaNGA cartridge contains 17 bundles ranging in size from 19 to 127 fibers, each enabling detailed observations of 17 galaxies simultaneously. Additional Information can be found on the MaNGA fiber feed page.

The SDSS's imaging camera is now at the Smithsonian, but all the images it collected are available online. The imaging camera collected photometric imaging data using an array of 30 SITe/Tektronix 2048 by 2048 pixel CCDs arranged in six columns of five CCDs each, aligned with the pixel columns of the CCDs themselves. SDSS r, i, u, z, and g filters cover the respective rows of the array, in that order. The survey operated the instrument in a drift scan mode: the camera slowly reads the CCDs while the telescope moves along great circles on the sky so that images of objects move along the columns of the CCDs at the same rate the CCDs are being read. As an image of an object moves along the column of the CCDs, a CCD in each row collects data on that object. Therefore, the camera produces five images of a given object, all from the same column of CCDs, one from each CCD in that column. It takes an object 54 seconds to move from the beginning of a CCD to the end, so the effective exposure time in each filter is 54 seconds. Because there is some space between the rows of CCDs, it takes an image 71.7 seconds to move from the beginning of one row to the next. Each row corresponds to a different filter, so each object has one image in each filter, taken at 71.7 second intervals. A detailed description of the imager can be found in Gunn et al. (1998), and additional information can be found on the Camera page.

During the night, an observer changes the cartridge to observe a new set of stars or galaxies roughly every hour. Each cartridge contains fiber-optic cables plugged into holes in a large aluminum plate. The positions of the precision drilled holes correspond to the positions of objects in the night sky. Thus, each fiber once "plugged" into one of the drilled holes is able to observe a single star or galaxy.

The “bright time” observing is during the full moon, the “dark time” is before moonrise, with the moon (not the sun!) rising shortly before the end of the video. Credit: John Parejko (University of Washington) and the SDSS collaboration. 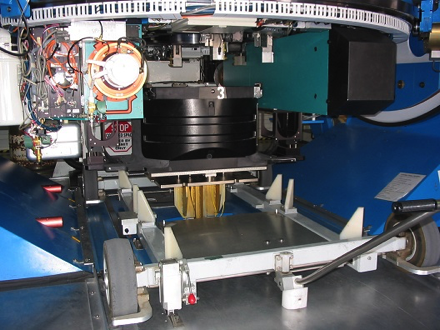 A cartridge is pneumatically lifted into place on the Sloan Foundation Telescope after being maneuvered into place under the telescope with the cart. Photo courtesy of J. Wilson. 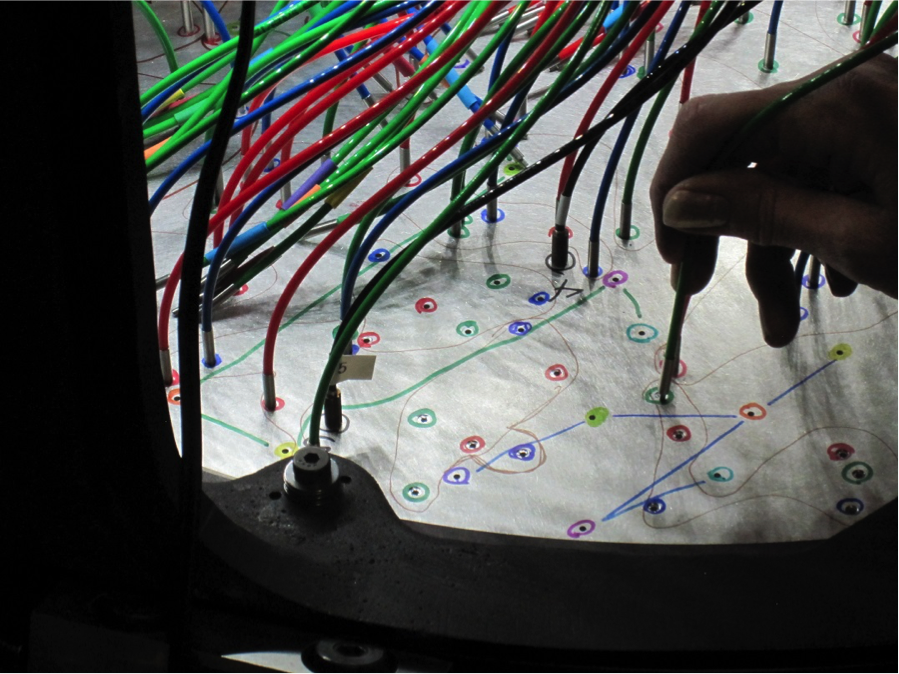 Prior to the observation of a plate, fibers are hand-plugged into pre-drilled holes and the fibers are then mapped by shining a laser on the slithead to determine which fibers correspond to which holes (and therefore to which stars). Here, an APOGEE-North fiber is plugged into a plate. Each hole on a plate corresponds to a single object on the sky and the different colored fibers denote faint, medium and bright targets. Photo courtesy of J. Wilson.
Back to Top

Utilization of the du Pont telescope required retrofitting to accommodate the needed infrastructure. Here, the fiber train, which runs between the telescope and the instrument located one floor below, is installed along the perimeter of the observing floor during commissioning. Photo courtesy of S. Majewski 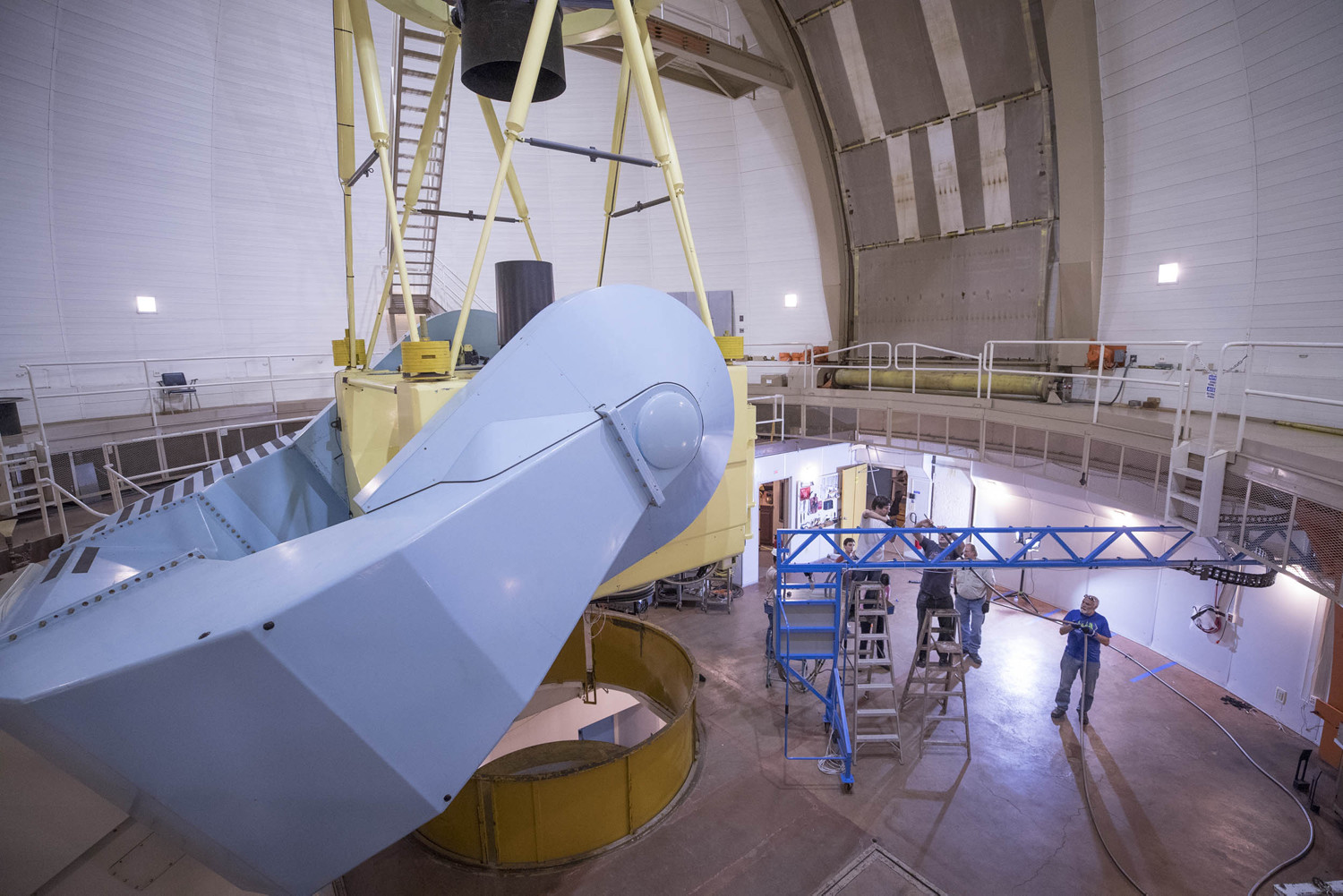 View of the du Pont telescope showing the boom that supports the fibers connecting the spectrograph and the telescope. Photo by Sanjay Suchak. Used with permission from here.

Unlike operations in the North, the observing staff alternate roles between observing and plugging because plates are plugged during the night. Nicolas Medina (left) and Maren Hempel (right) plug an Apogee-South plate. Photo courtesy of J. Wilson.

Plate storage racks at the du Pont Telescope. To the right of the racks is an empty cart. Photo courtesy of J. Wilson. 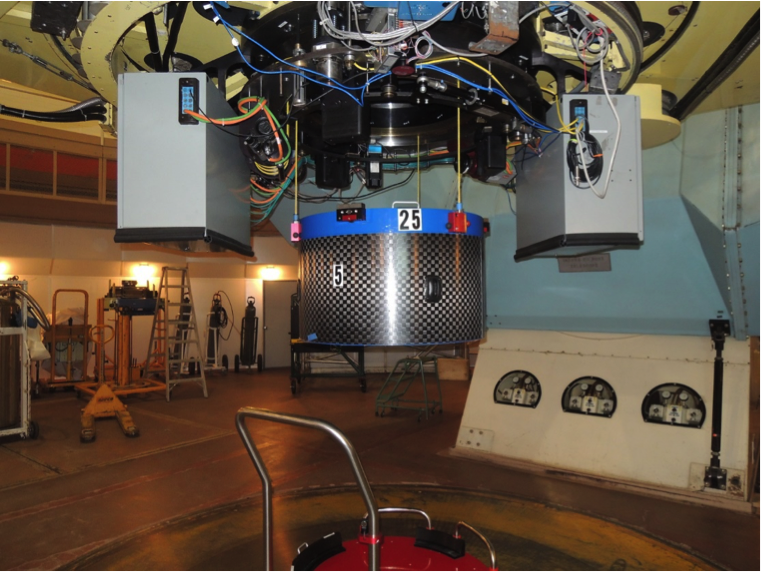 A plugged cartridge is hoisted into place at the Cassegrain focus of the du Pont Telescope using an intricate mounting system. Photo courtesy of J. Wilson. 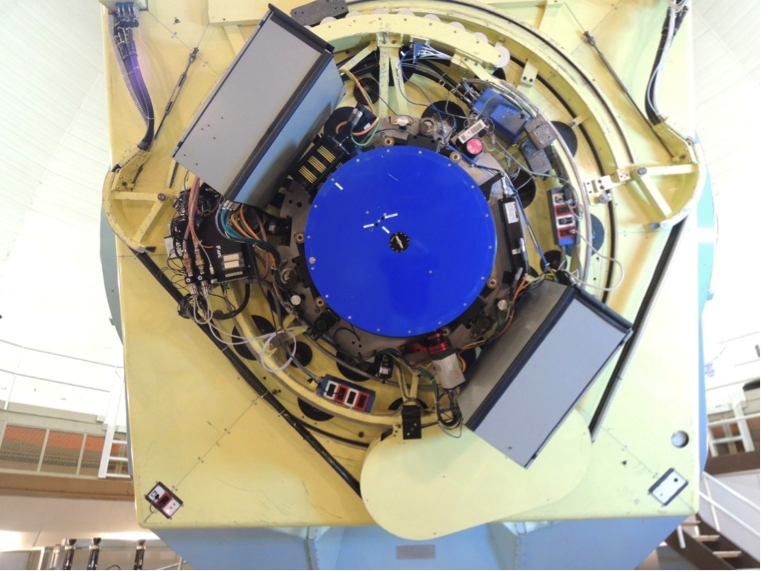 The view of a cartridge after being attached to the du Pont Telescope. Photo courtesy of J. Wilson.