Some of the key works from APOGEE relating to the Milky Way are summarized below. To recognize the significant contributions from Early Career Researchers, when referencing papers a * indicates a postdoctoral lead author, ** indicates a graduate student lead author, and *** indicates an undergraduate lead author.

APOGEE’s Explorations of the Milky Way

The core mission of the SDSS Apache Point Observatory Galactic Evolution Experiment (APOGEE) is to aid understanding of the formation and evolution of the Milky Way galaxy via mapping of the chemical and kinematical properties of the stars in its various constituent stellar populations. This high resolution spectroscopic survey was conducted over a decade in two phases: The APOGEE project conducting observations of ~160,000 stars in the Northern Hemisphere with the 2.5-meter Sloan Foundation Telescope at Apache Point Observatory in the United States over the years 2011-2014 (SDSS-III), while APOGEE-2, operating from 2014-2021 (SDSS-IV) and aided with the addition of a second APOGEE spectrograph attached to the 2.5-meter Irénée du Pont Telescope at Las Campanas Observatory (LCO) in Chile, expanded the stellar sample to nearly ¾ million stars in both hemispheres. 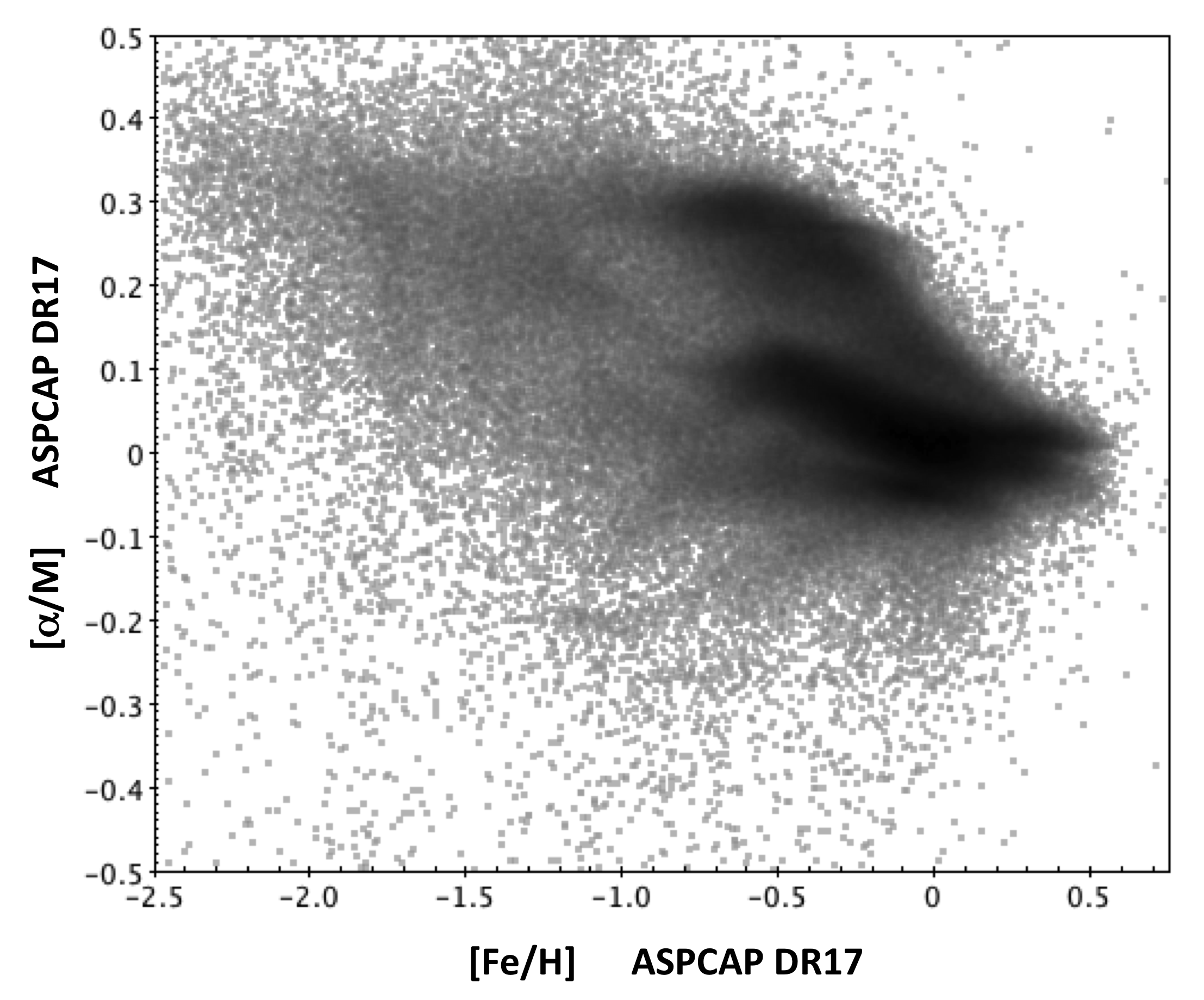 The [Alpha/M] to [Fe/H] diagram for all stars with such measurements from DR17. α-elements are primarily formed in core-collapse supernovae (high-mass stars) whereas Fe is formed primarily in Type Ia supernovae (low mass stars). Figure credit: R. Beaton

Unlike previous and other contemporary spectroscopic surveys of Milky Way stars, the combined APOGEE programs, because of their near-infrared sensitivity, have been able to probe stars in heavily dust-obscured regions of the Milky Way, like the Galactic mid-plane and central bulge. This has produced the first extensive mapping of the chemistry and kinematics across all stellar populations of the Galaxy, especially for the low-latitude disk. With the ability to measure 15 chemical elements for most stars, and more than 20 elements for some stars, data from the APOGEE survey have shown definitively that the Milky Way has two chemically distinct populations, evident in many combinations of chemical abundance ratios, but most clearly in plots of [α/Fe]-[Fe/H], where α is one of the APOGEE-measured α-elements (e.g., Mg, Si, S, Ca).

Extensive maps of the [α/Fe]-[Fe/H] distribution across the Milky Way disk show the “high-α” population is vertically more extended about the mid-plane and both ubiquitous and chemically homogeneous from the inner Galaxy to past the solar circle. On the other hand, the “low-α” population is more confined to the Galactic plane and shows a strong negative radial gradient in mean metallicity (Hayden** et al. 2014). With the aid of age-dating of individual stars (see below), analysis of the APOGEE data shows that these radial gradients are less steep for older stars (Anders** et al. 2017 ). The detailed metallicity distribution functions as a function of radial position in the disk are skewed (Hayden** et al. 2015), which is evidence that the metallicity gradients are softened as stars age due to stellar migration. 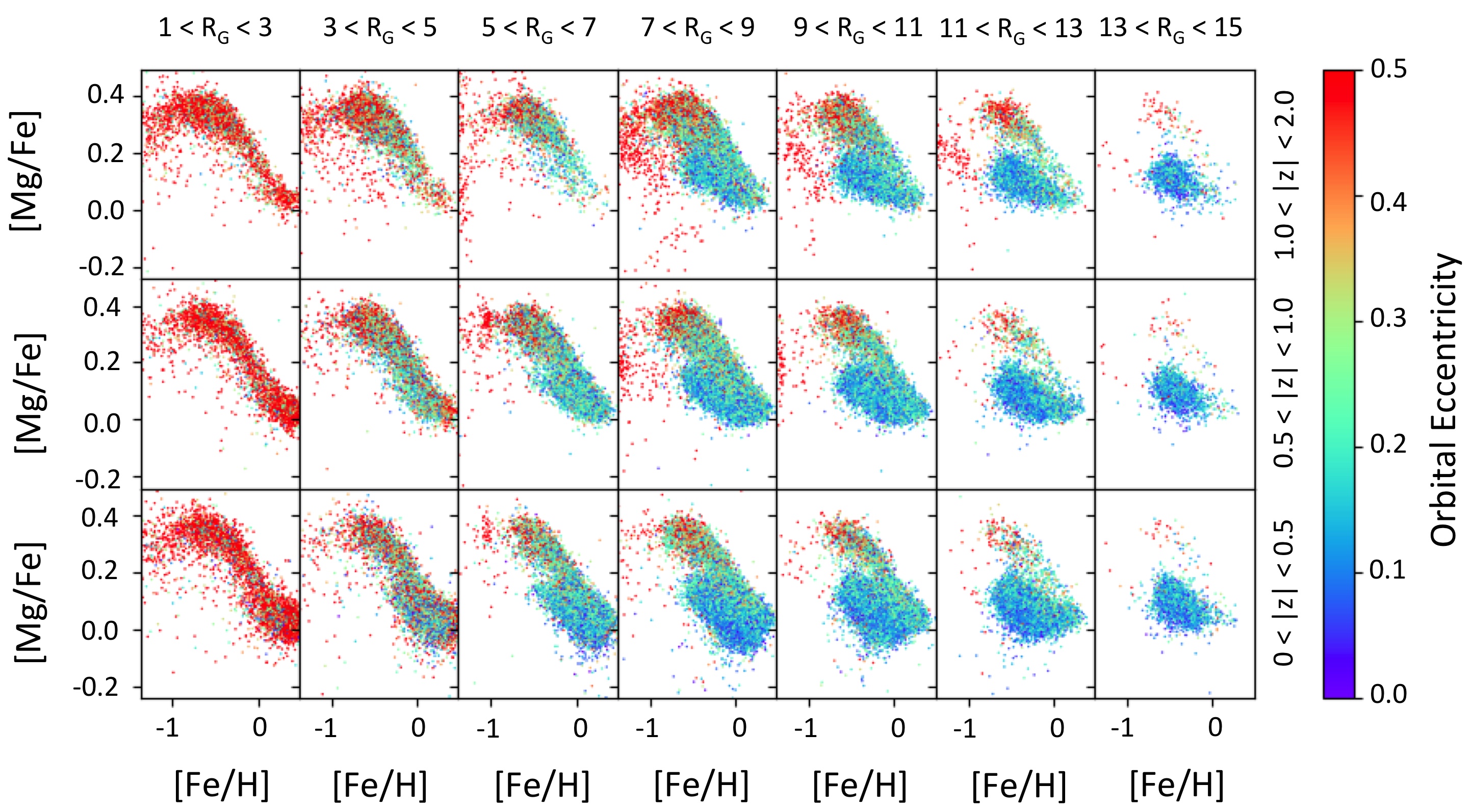 Spatially-resolved [Mg/Fe] to [Fe/H] diagram for giant stars in DR17 with distance and age estimates . The spatial bins of scale height (z) and Galactic radius (R). The two primary sequences are referred to the high-α and low-α populations and have different contributions as a function of the spatial location. Figure credit: J. Holtzman and SDSS 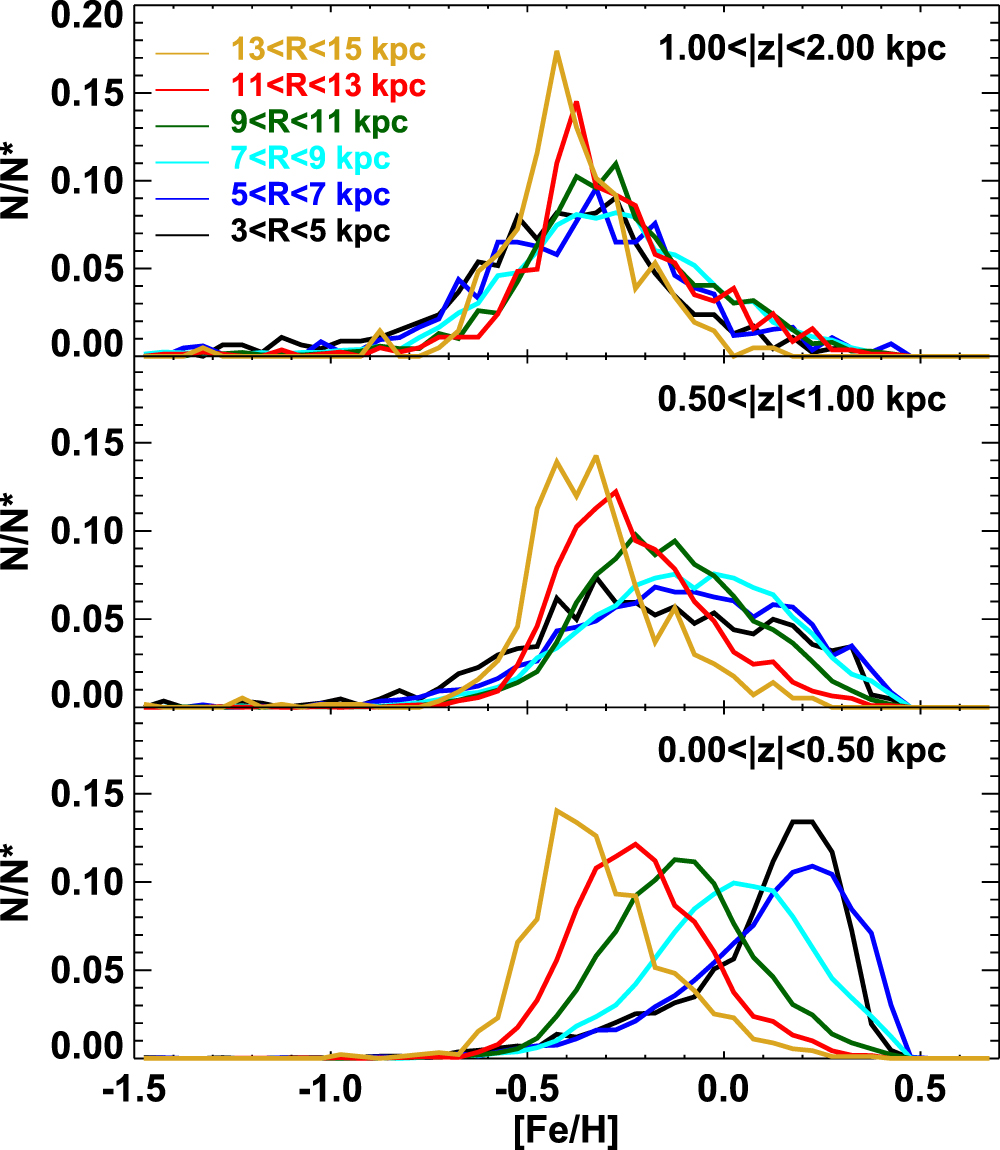 Metallicity distribution functions for different spatial regions of the Milky Way, as divided using the scale height (z) and Galactocentric radius (R). The distributions are strongly skewed, indicating that populations have to have mixed over time. Figure from Hayden** et al. (2015).

For stars with the lowest overall metallicities (e.g., [Fe/H] < -0.8), again two chemo-kinematically distinct populations are found (Hayes** et al. 2018), with a “high-α” population that shows a significant rotation and a second population that has mostly lower α-abundances (though higher α-abundances at the lowest metallicities) and shows no net rotation. The former population may well be an old, metal-poor extension of the high-α sequence at higher metallicities, whereas the low metallicity, kinematically appears to be constituted of stars that have been accreted from now-merged satellite galaxies (Mackereth** et al. 2019). APOGEE spectra of stars in current Milky Way dwarf spheroidal satellite galaxies reveals them to have overlapping chemical trends with the field stars in the kinematically hot population (Hayes** et al. 2018; Hasselquist* et al. 2021). Chemical abundance models show that the “high-α” population had a more intense and extended star formation history that favored the creation of more massive stars compared to the “low-α” population (Fernandez-Alvar** et al. 2018 ).

One major Galactic accretion event, identified with the combination of APOGEE chemistry and Gaia proper motions, created a kinematically coherent group of high eccentricity halo stars known as the Gaia-Enceladus system. Meanwhile, mapping of abundance gradients exhibited by a sample of many stars within the tidal streams (Hayes** et al. 2020) of the actively merging Sagittarius dwarf galaxy gives strong evidence that the Sagittarius progenitor had significant radial abundance gradients. Yet another source of halo stars is from dissolved globular clusters, and APOGEE analysis has shown that the inner halo of the Milky Way contains a significant fraction of field stars with distinctly globular cluster-like chemistry.

APOGEE has also made significant contributions to the study of its still intact satellites. As the largest and most extensive high resolution spectroscopic survey of the Magellanic Clouds yet conducted, APOGEE chemical data reveal the surprising result that not only were the Clouds “lazy” in the production of stars in their early evolution compared to other, less massive Milky Way satellites --- perhaps because the Clouds formed in a lower-density environment, far away from the Milky Way --- but that their chemistry also indicates that they made up for their early indolence with a strong burst of star formation in the past few billion years (Nidever et al. 2020, Hasselquist* et al. 2021). Comparison to APOGEE data in other large Milky Way satellites (Sagittarius, Fornax and the Gaia-Enceladus system) shows that their second starbursts were both earlier and smaller (or non-existent, in the case of Gaia-Enceladus) than for the Clouds (Hasselquist* et al. 2021). 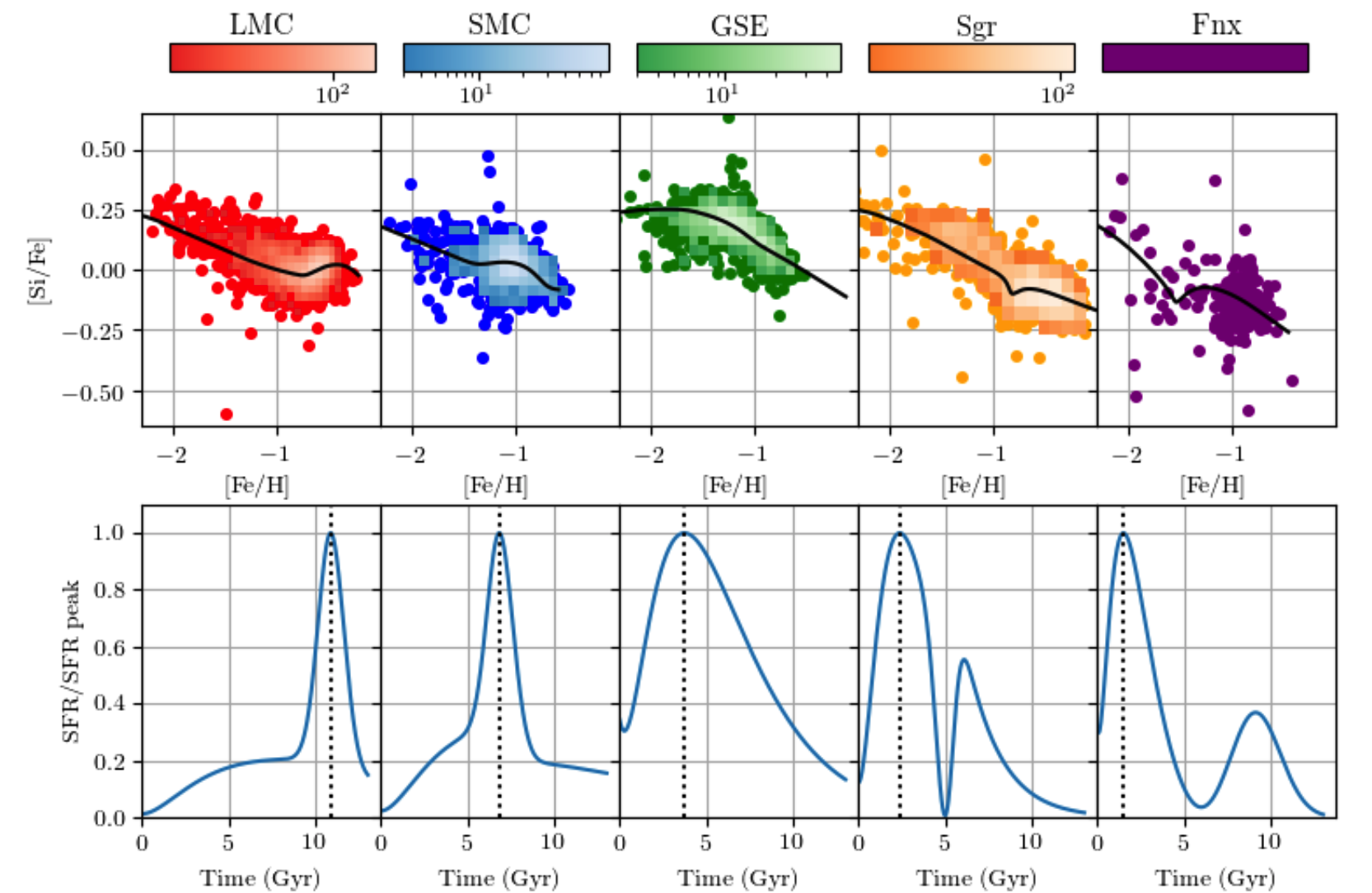 (Top Row) [Si/Fe] to [Fe/H] diagrams, from left to right, for the Large Magellanic Cloud, Small Magellanic Cloud, Gaia-Enceladus debris, Sagittarius (core + stream), and Fornax. (Bottom Tow) The chemical evolution of [Si/Fe] can be used to constrain the star formation history of the system, here shown by the instantaneous star formation rate (SFR) normalized by the average SFR for each system.
Image Credit: Hasselquist* et al. 2021 (Figure 9)
Back to Top

APOGEE has performed the most systematic, high resolution spectroscopic exploration of Milky Way globular clusters (Meszaros et al. 2020, Masseron et al. 2019), including some of the first chemical measurements of stars in a number of clusters in the Galactic Bulge whose study requires NIR observations (Geisler et al. 2021). This has enabled the largest homogeneous exploration of multiple populations in globular clusters (based on 2283 stars in 31 globulars), as exemplified by the prevalent element ratio correlations or anticorrelations between elements (e.g., Na-O, Mg-Al, C-N), and resulted in the discovery of a turnover in some trends for the most metal-poor systems, likely as a result of very hot proton-capture nucleosynthesis. As discussed above, fields stars in the Milky Way disk and bulge showing Al and N abundances similar to second generation stars in globulars were likely derived from dissolved clusters (Fernández-Trincado* et al. 2017; Schiavon et al. 2017).

Anti-correlations in the distribution of [Al/Fe] to [Fe/H] for the 30 globular clusters studied in Meszaros et al. 2020. 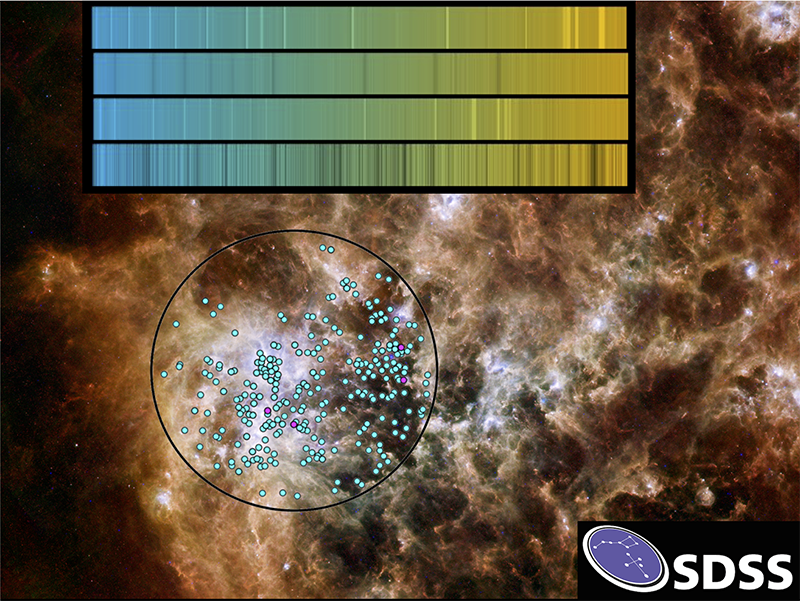 APOGEE's infrared sensitivity, multiplexing capability, and large field-of-view made it uniquely suited to conduct comprehensive, multi¬-epoch spectroscopic surveys of the stellar and kinematic properties of members of nearby star forming regions. With homogenous stellar parameters and radial velocities for nearly 10,000 bona fide YSOs, the resulting dataset enabled (in the pre-Gaia era) highly precise measurements (s ~ 100m/s) of the slightly super virial states of the stellar populations in the IC 348, NGC 1333, and Orion A systems. When combined with comparably precise distance and proper motion measurements from Gaia, APOGEE-2 radial velocities and stellar parameters provided an unprecedented diagnosis of the structure and history of multiple star formation events throughout the full Orion Star Forming Complex, and ruled out evolution in the close binary fraction of solar-type stars between the pre-main sequence and main sequence stages.